<
Jean-François and Alain Bernardini were born in the small village of Tagliu-Isulaccia in the Castagniccia. At a very early age they began to sing with their father, Ghjuliu, who was a great poet and singer. Ghjuliu (Jules) Bernardini, one of the core 'traditional' singers from the village of Tagliu who features prominently in the field recordings of Quilici, Laade and others made between 1948 and 1973 and who is still very much revered ( posthumously, Ghjuliu Bernardini died in december 1977 ) as one of the anchors of the tradition.
Shortly after the Aleria-drama Ghjuliu Bernardini wrote "Lettera à fratellu".
They recorded their first single with their father in collaboration with the group "Canta u Populu Corsu".
"I Muvrini ... ti ringrazianu", their début album, released in 1979, was dedicated to their father's memory. 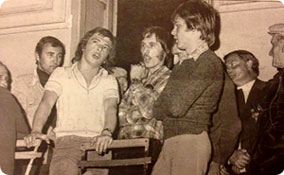 The early years of 1980 were difficult: some villages forbade the group to perform under the pretext that they disrupted public order.
I Muvrini however, continued to sing in the Corsican language. They created their very own style by mixing traditional music with their own compositions. The Corsican identity was placed at the heart of their sound. The title of I Muvrini's second album 'Anu dŕ volta' was a reference to the Corsican political prisoners of the late 70's.
The public became more and more enchanted and came in great numbers to their concerts. The group embarked on various events on the continent: Spring Festival of Bourges, Palma de Mallorca, Bretagne and Germany.
In their aim to preserve the musical heritage of their island they set up special music schools to teach the children of Corsica about their musical and cultural heritage. The lovely album "Rundinella" was recorded with the assistance of the children of these "scola aperta".
Their next album "E campa qui" was a big success and got a lot of airplay by local radiostations.
I Muvrini became the leading group of the Corsican music scene. The political message they spread through their music and their commitment to local political life increased their popularity. I Muvrini's concerts became major events, for Corsicans as well as for tourists.

In 1985 "I Muvrini '85" was released, a year later "A l'Encre Rouge". The I Muvrini style was absolutely perfect on their album "Lacrime", which was an immediate success.
After the success of this album they created their own label: AGFB.
The fame of I Muvrini had now reached beyond their homeland; their polyphonic sound became a huge hit throughout Europe.
"Pè l'amore di tè" ,recorded in Paris and released in 1988, proved enormously successful and sold over 300.000 copies. The next album "Quorum" was recorded in Toulouse in 1989, followed by their first live album "In Core" in 1990.
I Muvrini were also noticed by other musicians. They worked together with Jaques Dutronc, Michel Fugain, Veronique Sanson, MC Solaar, Tina Arena, Sarah Brightman and Sting.
In 1993 they recorded their twelfth album "Noi", which contained the beautiful traditional song "Lode di u sepolcru".
Highlight of the summer of '93 were the two concerts at Le Zénith in Paris.
See the text "A nostra Storia" which is on the CD Zenith 93 integrale, a text by G.Coanet, recited par Jean-François BERNARDINI.
I Muvrini won the French music award Victoire de la Musique in 1998 and 2003, and was also nominated for the award in 2006. In 2005 they recorded ALMA (soul in Corsican), which was partly recorded in Johannesburg, South Africa, with Zulu choirs, and in 2007 "I Muvrini et les 500 choristes", which became their seventh French Gold Medal Record since 1994. The group has collaborated with internationally renowned artists, including Sting (with whom Jean-François recorded a duet version of Sting’s “Fields of Gold”), Haris Alexiou, Nana Mouskouri, Ute Lemper, Angun, Tina Arena and Sarah Brightman. I Muvrini has appeared at prestigious concert halls and festivals across North America and Europe. Their Alma tour in 2005 carried a message of peace containing the Spanish proverb "If I had a thousand souls I would give them to you all. But I have only one, take it a thousand times."
I Muvrini remain ardent defenders of their island home, they seek to assert heritage. As evidenced by the album Gioia released in 2010 and from celebrating thirty years of career.
Gioia ( joy ), recorded in studio ALMA includes the duet "Una Terranova" with Grand Corps Malade, and welcomes Thomas Dutronc.
In 2012 the wonderful CD 'IMAGINŔ' was released. On this CD contemporary themes are addressed, themes that are dear to I Muvrini's heart, such as environment, globalisation, and a very Corsican theme: political prisoners.
Latest CD 'INVICTA' released in march 2015 has the subtitle 'Music for Non-violence'.
music for non-violence
Invicta, le chant de la conscience jamais vaincue,
le chant des droits de l'âme...
Invicta tangles languages, cultures, instrumental colours. I Muvrini's Corsica is Celtic, South African, folk, trans, blues, gospel ...

Special was the friendship between I Muvrini and Dorothy Carrington (1910 - 2002), the English historian who lived and worked in Corsica.

The road I Muvrini took was never an easy one, in spite of all the difficulties they remained faithful to their background, their culture and their language.
Now, after more then 40 years, they are famous in and beyond Corsica. Yet, they have kept their integrity and their commitment.
And their message of brotherhood and solidarity shines through their music.

Every year I Muvrini dedicate a large part of their tour to Corsica, the 'Giru Corsu' , meeting and talking with their public, making the 'Giru' unforgettable for all concerned.

Of special interest to I Muvrini: