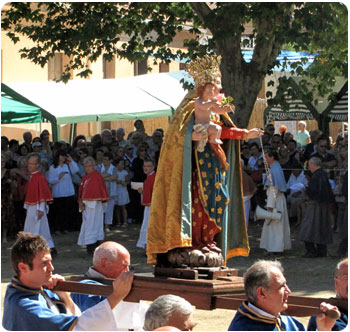 U Niolu, land of shepherds and traditions

The festival of A Santa di U Niolu

Ferdinand Gregorovius wrote in his history of Corsica in 1852:
"In this region dwell the strongest men on Corsica, patriarchal shepherds who have faithfully maintained the tradition of their forebears."
The "Santa" Festival is one of the largest and most important festivals in Corsica. Each year, on the 8th of september, the people gather together to celebrate the Nativity of the Madonna. This tradition, handed down across the centuries, is brought back to life in the little village of Casamaccioli, to the south of the Calacuccia lake. The festival attracts many people to Casamaccioli, up to 10.000 visitors for the three-day event.
The morning begins with a religious service, which is celebrated according to tradition on the square in front of the parish church. The wooden statue of the Virgin Mary is carried out of the church and placed next to an old crucifix in front of the altar.
As soon as mass begins, a group of five men sing the Paghjella, a tradional chant. At the end of the mass a group of men carry the statue of the Virgin Mary round the village square. The Fraternity of Saint Anthony, white robed penitants, forms the granitula, a spiral procession.

Traders erect their stalls and sell their products like lonzu, coppa, wine, honey, liqueur and eau de vie.
During the afternoon of the first day, the mountain shepherds gather to compete with one another in the improvisations and the 'Chjam' è Rispondi', a musical dialogue. They demonstrate a quick wit, often very humourous. The verses sang by the older men are full of poetry. The singer who is best in expressing himself is rewarded by applause and laughter from the audience.
The music and singing will go on until the sun finally disappears behind the peaks of the Cinque Frati and the Monte Cintu.

The story of the Santa


On a stormy night back in the 15th century a ship had been blown off course near Galéria. Its situation seemed hopeless, but the captain prayed to the Virgin Mary for assistance. In his despair he vowed to donate the most beautiful statue of the Madonna he could find in Genoa. Immediately a strange light appeared above the Franciscan Monastery at the foot of the Tafonata forest. The captain kept his promise and the statue was erected in the monastery church.
During the 16th century, when the Turks destroyed the monastery, the statue of the Madonna was saved. It was carried by mule high up into the mountains of the Niolo. When the mule reached the village of Casamaccioli, it suddenly threw the statue to the ground. The statue was placed in the Chapel of Saint Antoine near the cemetary. The next day it miraculously reappeared in the middle of the village.
After this had happened several times, the shepherds of the Niolu built a church dedicated to the Virgin. Ever since that day, they have celebrated the festival of the Nativity of the Virgin.

The journey of the Grand Penitent ends where it began, beside the Church of Sainte Marie where the priest delivers a Sermon and Blessings to the peope gathered at the square.

The Midsummer Festival of Saint John the Baptist

Until about fifty years ago Corsica followed the tradition of the cumparaggiu.

Christianity, established in the island since Roman times, has struck deep roots into the Corsican collective psyche. It is adhered to with fervour and respect, in exaltation and in grief, as a counter-force to all the harm inherent in the universe. Slow to accept technical innovations from abroad, the Corsicans were responsive to spiritual influences: the megalithic faith in pre- and proto-historic times, then Christianity from the second century. Environed by pagan forces, Christianity, militant, proclaimed itself with its churches and chapels all over the island.
The Corsican year is punctuated by religious festivals that give colour and meaning to the routine of living. On Palm Sunday palm leaves, twisted into intricate shapes (a local craft), are blessed in the church square. Good Friday night is the occasion, in various villages and small towns, of penitential processions in which the whole populations takes part.
The pagan celebration of the solstices is incorporated into the practice of the Catholic Church. Huge bonfires are lit in the church square on the eve of the midsummer festival of Saint John the Baptist (June 23th), and on Christmas Eve.


On the eve of the feast of Saint John the fire is made from aromatic plants - arbutus, lentisk, rosemary, the incense-scented immortelle - collected by the boys of the village in the maquis during the day. That night is the occasion of the cumparaggiu, a traditional non-religious rite much prized by the inhabitants. Young girls and young men - up to the age of about twenty - engage in bonds of lifelong friendship which are sealed when they jump twice over the bonfire holding hands. The link may be made between two girls, two young men, or a girl and a man, and may include four persons. They are not relatives nor potential marriage partners. Thereafter they become commères, the girls, and compères, the young men, and they owe each other affection and loyalty in every circumstance through life. They may become godparents to each other's children.


The cumparaggiu is a Corsican institution of altogether exceptional kind. It is unconnected with sexual or blood relationships; it has no connotation of violence or death. And it is based on choice: choice, an advantage which traditional Corsican society offered to few of its members, women or men. It has died out, but quite recently, so that there are still elderly people who cherish an affectionate friendship with the commères or compères with whom they leapt over the fire fifty or so years ago.


Today, on the eve of St. John, bonfires are still lit to celebrate the summer solstice.
Source: Dorothy Carrington: The Dream-Hunters of Corsica (1995) 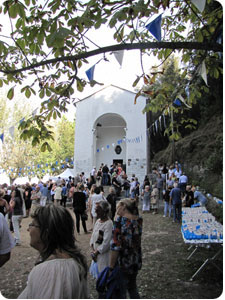 In the village of Pancheraccia, as was the case in Lourdes, it is said that in the 18C the Virgin appeared to a little girl lost in the woods, creating a spring in a place where there was nothing but rocks and maquis.

In the 18th century, a 12 year old child had gone with her mother into the woods not far from the village of Pancheraccia, to make bundles of wood.

After a while she was lost and she began to cry, complaining of thirst, when suddenly, the Blessed Virgin appeared and asked why she was crying.
The child replied, "I got lost and I am thirsty." At these words the Virgin made a hole in the ground, creating a spring and said "drink and then go and tell the people of this village to build a chapel here."
"Yes" said the child "but people will not believe me." And Our Lady replied, "for proof, here is an indelible sign of the cross on your hand, and within a year you are no longer of this world."
The village had only a poor population of 200 souls. However they all began to work, the bush was cleared, the rock leveled and the chapel, dedicated to the Madonna, was built.
By 1852, the former statue was replaced by a white marble statue.
Witnesses of the festival saw a light like a crown the moment the ancient statue was taken from its niche. The new statue, marble represents the Virgin standing, sitting on her left arm the infant Jesus holding the world in his hands.

Many graces were obtained through the intercession of the «Madone of Pancheraccia».
"One day a poor man covered with a kind of leprosy went to the chapel. He spent all night in the vestibule next to the mysterious source, and washed himself during the night. In the morning, the priest came with the villagers to celebrate Mass, and found that the poor man was completely healed. All his skin had fallen away and was lying at his feet like a garment."

* The evidence is of John Paul Casanova Pancheraccia, born in 1843 and two brothers FRANCESCHI born about 1836, who attended as a child the replacement of the statue and who held their father's traditions concerning the origin of the Chapel.

Great is the confidence and devotion to "the Madonna of Pancheraccia," the inhabitants of nearby villages, pilgrims growing in number, celebrate enthusiastically the "Fête de 8 Septembre."

It is the only authenticated apparition of the Virgin Mary in Corsica, in the 18th century. Much earlier than Lourdes. The sequence of events is almost identical, except for the cave .. There is no cave in the corsican history!

An annual pilgrimage takes place on September 8, Feast of the Nativity of the Virgin Mary.
The chapel remains open to pilgrims throughout the year as this superb site is more than just a sanctuary - the unspoilt setting and peace and quiet here are popular attractions in themselves. On Christmas Eve, Corsican tradition dictates that signadore transmit their knowledge.
This is one of the most ancient traditions of the island: l'ochju, or (evil) eye, a very ancient belief and very much alive but especially the transmission of knowledge of Signadore.
To anyone living on the island, having 'the eye' means something. Believer or not this pagan practice, the compliance or even fear for this ritual is still very present.

We have found similarities of l'Ochju in many Mediterranean cultures, all very worn on the ability to harm others if we have the "recipes" necessary but also inadvertently.
So it is an important moment: that of being "cure" to be "removing the eye." This is where the Signadore (those who sign) come in. Although men can become Signadoru, it is an eminently feminine tradition that knowledge transfer can be done exclusively on the Christmas Eve and only orally (the practice may be known to men, but they should not be able to pass).
To become Signatora, one must be a practicing Catholic in order to practice a sacred gesture.
From mother to daughter, or even more precisely from grandmother to granddaughter so it is on this is Christmas Eve, Veghja di Natale, before moving to December 25, the transmission of knowledge , prayers, capacity and grooming should be made.
If the practice of annuchjatura (or mazzulata) varies greatly depending on the region in Corsica one thing never varies: the transmission date. The initiation of girls can be done only that night! This is where the signadora learns to read the famous oil drops falling on the plate or perform gestures to discover evil. The inseparable prayers of this practice also revealed that night, in the utmost secrecy of this inter generational family tradition. She therefore learns to break the spell and returning her visitor to a normal state: i incantesimi.
With modern times, the practice has expanded to transmission outside the family framework, in order to perpetuate traditional knowledge. However, if transmission does not occur during the Christmas vigil, knowledge is supposed to be inefficient and the power lost!

The secret of Christmas...

Date of transmission of the mantra, Christmas Eve, remains mysterious. Why only on that night? Some would say it is the only totally serene night, when all the evil souls are absent.
It is probably also related to the night of the winter solstice, the longest and therefore darker. It is also the season of Christ.
So here we find the eternal island paradox between pagan and religious.